Fresh off the Easel Friday 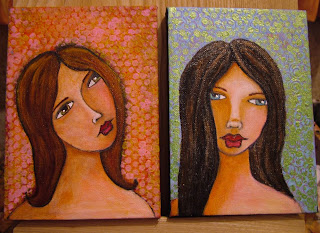 Remember the show 'It's Your Move' from the mid 1980's? It starred Jason Bateman as a scheming teen whose mother was dating the new neighbor across the hall and he was always coming up with some outlandish plan to get rid of him. I used to love that show!...probably because I thought Jason Bateman was so cute. I stumbled across it on Youtube tonight and have been watching old episodes while I finished the 2 paintings I posted on Wednesday. I've just finished them, so the photos were taken in artificial light again. 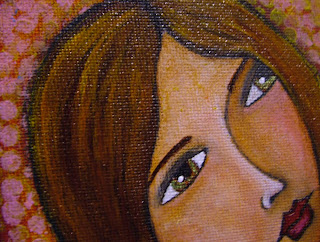 I added more color to the hair, blending various tones to give her hair a bit more texture and highlights. I was going to make her eyes brown, but they seemed too flat to me, so I dotted a tiny bit of metallic green on top. Now they appear more hazel and also have a subtle, interesting sheen. I added some eyebrows and tidied some lines around her face and she's done! 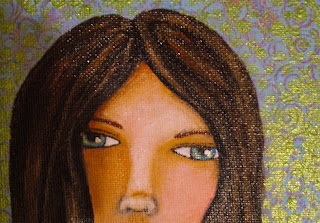 I had originally planned on making this girl's eyes brown as well, but just wasn't happy with it, so I painted them over in blue. I used the same metallic green for her eyes as I did on the other girl, tapping just hints of it on top of the blue. It's the same green from the background, so it subtly repeats color and unifies the painting. I'm really pleased with how she turned out.
Posted by JolieArt at 23:02