Poem in Your Pocket Day on Thumbs Up Thursday

I have never been a fan of poetry. I truly appreciate the skill and passion it takes to express one's emotions through the written word, but can only remember actually being moved by two poems in my entire life. The first time was when Ponyboy recited "Nothing Gold Gold Can Stay" by Robert Frost in the movie, "The Outsiders". I had a massive crush on the stars, C. Thomas Howell and Ralph Macchio, so to be honest, I can't even swear it was the poem I was moved by. It's entirely possible it was my 13 year old hormones talking!

The second time was tonight, while I was speaking to my best friend over Skype. Today is "Poem in Your Pocket" day and Alec, her 9 year old son, wrote an original poem and decorated his own pocket during class today. He showed it to his mom, who in turn read it to me. My heart fluttered! It actually fluttered for poetry! Alec profoundly said so much in such a simple, succinct way and I gotta tell ya, I was impressed! He wrote the poem all by himself. His mom helped him to change it from paragraph style to a line for each sentence, but the poem itself is all him! If only we were all as wise as Alec. I think the world would be a far better place. Anyone who can move me with poetry definitely gets a big thumbs up! 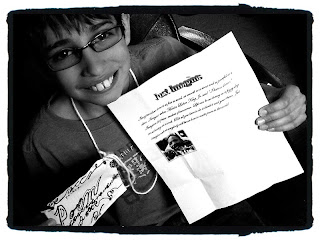 Imagine when Time is as fine as sand
As smooth as a stone and as peaceful as a dove.
Imagine when Martin Luther King Jr said, "I have a dream."
Imagine the peace-makers of tomorrow.
Life can be as dreary as a foggy day, or as boring as a rock.
But all you have to do is think it, and you're there.
Just imagine when everybody will know how
To make Peace in the world.

Email ThisBlogThis!Share to TwitterShare to FacebookShare to Pinterest
Labels: Poem in Your Pocket, Thumbs Up Thursday

Castle Mall and Antrim Schools on Thumbs Up Thursday 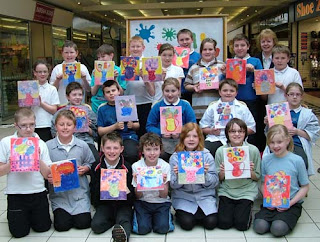 I've been privileged to be the artist-in-residence at Castle Mall for the last 5 years. I was there last week facilitating their Art for Schools programme, which is part of an on-going initiative to foster creativity, confidence and freedom of expression in local children. Over the course of the week, I taught approximately 250 kids from local schools in a series of 2 hours painting sessions done right on the mall.


The budding young artists worked from a reference photo to create a still life floral painting on canvas. They began by looking for simple lines and shapes, rather than the more complex whole. They identified and sketched only the most important details of the photo (top and bottom of the flower pot, overall shape of the flowers, etc). They were encouraged to use the reference photo as a starting point, but to make their own decisions about what to put in or leave out, such as whether they wished to draw the handle (or add an extra one on the other side).
After their sketches were complete, students added texture with collage before ever adding any paint to their pieces. After tons of prep work, they mixed their own colours from the primary colours (red, yellow and blue), as well as white and completed their masterpieces. The mini Monets showed amazing creativity, patience and focus as they worked. They definitely deserve a big thumbs up!
Of course, Castle Mall deserves a big thumbs as well up for supporting kid's creativity! They'll be displaying the works of art until around Easter, so make sure you pop in to have a look at the exhibition if you're anywhere near the area. I'll be adding lots and lots of photos to the Art for Schools album on my Facebook page, so be sure to stop by and show the kids your support by liking it!
Posted by JolieArt at 23:09 1 comment: