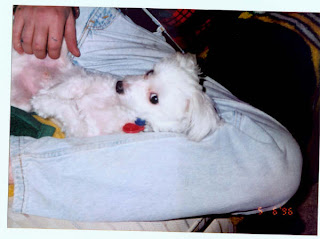 I was going to work on a few paintings that I have on the go tonight, but I just couldn't find the enthusiam, so I watched TV instead. I'm just too sad. My sister called to tell me that my dog had died. I suppose technically, he was her dog now, as I had no choice but to leave him behind when I moved abroad. Still, everyone new he was my baby.

I had him since he was a puppy, but he was 14 and I knew he probably didn't have much time left. He was a maltese, a small breed, so I hoped he was one of those who would hang around until 16 or 17. He went peacefully in his sleep and he seemed happy until the end, so for that I am grateful, but I'm also sad. I loved that little dog like you wouldn't believe. I know everyone thinks their dog is the best dog, but mine was the best little dog ever. He was so cuddly and funny and such a flirt and I swear he had a cheeky grin! I don't care if dog experts say dogs don't smile, Bailey did. There will never be another like him.
Posted by JolieArt at 23:48