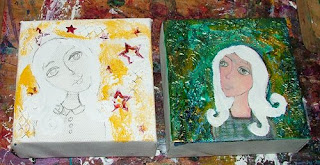 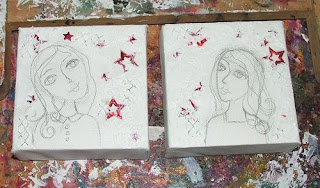 Well, I have my answer...so far, mini canvases are an exercise in frustation! Sketching wasn't so bad, but a little bit tricker, as there was nowhere to rest my hand and tiny eyes are harder. That's a minor thing, so no biggie so far. Obviously, there isn't a lot of space for collage, so I had to settle for just a few bits. I didn't have much space to go play with spreading gesso for texture either.

On the plus side, I was feeling impatient and wanted to get straight to the paint, so I used my heat tool to speed it up. The gesso bubbled and popped from the heat, leaving a fantastic texture! I could probably translate this idea to my larger canvases, but I'm not sure how well it will work, as I put the gesso on much thicker on big pieces.

I have the first few background layers of one canvas done and it's looking cool so far, much better than in my photo. I used a few blue and green colours of Golden Fluid Acrylics and Stewart Gill Byzantia, as well as Lumiere sunset gold. It is giving it a rich, aged patina look.

So here is the frustrating part...the face! Even with a tiny brush, I keep smudging everything and accidentally painting over part of the features. Grrr! I am just not a steady handed person and my nature is to paint with big, fast, carefree strokes. That doesn't work too well on a 4 inch canvas.

I'm going to keep at it though. Who knows? It's a challenge that I might start to enjoy once I get my head around having to do things a little differently. However, I am going to draw the face about twice the size on the next one. It will mean less background and no torso, but I think it's a compromise that will make me happier.
Posted by JolieArt at 21:11