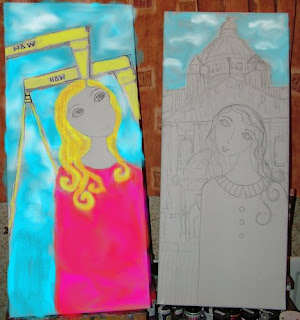 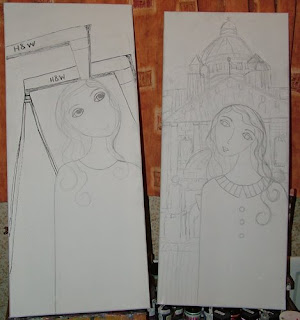 I had the idea to continue on with my mixed media girls, but to do local landmarks in the background. I have decided to do a series of girls with local landmarks in the background. I have 2 sketches on canvas ready to go, but can't decide which direction to take next. I'm considering keeping on in the same vein by collaging all over and painting the same colours on both the girl and the background. That would be very interesting, but might make it really hard for the landmarks to stand out or be recognized. On the other hand, I can't decide whether I want sky, etc in the background either. The top photo is a Photoshop experiment and am going to just mull the idea over for a few days.

The landmarks are the Belfast City Hall and the Harland and Wolff cranes famous for holding the Titanic during it's construction. Unfortunately, I didn't notice while sketching that it looks like one of the cranes is coming out of the girl's head. Doh! I like the placement of the cranes and wish I had done the girl further to the left. It's a bit late to change it though, as I have outlined the cranes in permanent marker already. Hopefully, it will look more like background and not a weird head growth when I am finished. LOL

On a side note, I'm no longer positive about the title "Belfast Babes". It has been in my head for a while, but my friend (Toni) isn't nuts about it. She suggested "Global Girls" and considering doing girls in other cities too. I'm mulling that over too.
Posted by JolieArt at 17:53