While checking the BBC One website tonight for information on the season premeire of 'Merlin', my husband discovered 'Waking the Dead', a show similar to 'Cold Case' in that it is about a team that investigates old, unsolved cases. I don't know how we missed it until now, as the show is actually in its 8th season.

You can watch many of BBC One's shows on their website for a few weeks after they air, so we thought, 'What the heck...we'll see if it's any good.' British TV tends to be a bit slower paced and less glamorous that American shows, and 'Waking the Dead' seems to be no exception. As an American, it's a bit of an adjustment for me, so I was surprised to enjoy it. As a matter of fact, because the show doesn't rely on gorgeous characters, special effects and a big soundtrack, it really has to be all about the storyline and the acting. There was a character that creeped me out beyond belief and I actually cried while the victim in this episode was describing her experience. I was just so engrossed in the story! I'm not sure if it's available in all countries, but if you can access the show, I definitely recommend watching it. 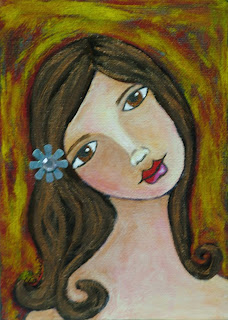 By the way, don't forget that I will be drawing a winner for my giveaway next Saturday, September 26th. If you haven't entered for your chance to win this original painting, be sure to get your name in for a chance to win! Have a look at the original post for details.
Posted by JolieArt at 21:39