Not So Fresh off the Easel Friday 'My America' 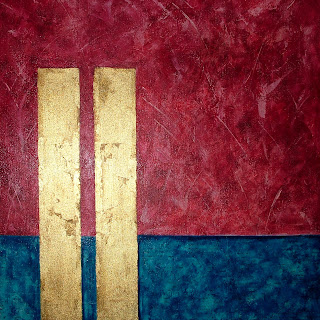 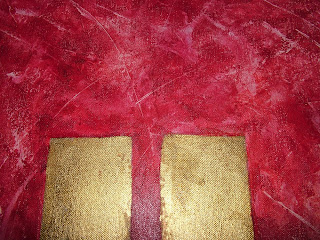 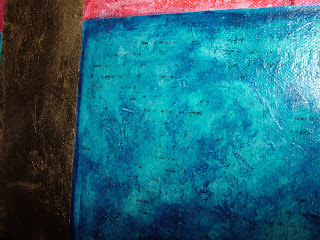 Detail showing hint of Declaration of Independence embedded between layers

Rather than sharing my new work with you this week, I thought it more appropriate to share an old painting that is NOT so fresh off the easel. I don't often feel the need to make a statement with my art. I'm generally content just to paint something pretty and to enjoy the process of creating. This painting was different. It was painful and raw and I felt like it had to SAY SOMETHING.
I remember exactly what I was doing on September 11, 2001. Who could ever forget? I was watching the tragedy live on the news, with horror and disbelief. I had moved from the USA to Northern Ireland only the month before and I have never felt as far away from home as I did that day.

I avoided a lot of the news coverage that first September. I had made a choice to leave a place that despite its imperfections seemed secure, to live in a place that has had political upheaval and paramilitary violence for over half a century. It was impossible to believe that the place that was home my entire life, the place that seemed so strong no one dare invade it, MY AMERICA, was suddenly not any safer than the rest of the world. Facing the fear that something could happen to someone I love dearly or that America might not represent the same security it always had was just too difficult. Each time I thought about the events of September 11, 2001 I cried…sometimes I still do. I didn't know any of the victims and will certainly never understand the level of grief their friends and families must have experienced, and yet like every American, something about it still felt so close to home and I am not the same person that I was before that day.

On the first anniversary of 9/11, a program was on about the terrorist attacks. It showed all the footage I found too difficult to watch previously. I forced myself to watch it…the interviews with people who had lost loved ones, the footage of the planes actually hitting the towers, the people running through the streets in fear, the tales of the many heroes that day…2 hours documenting an event that profoundly changed the lives of everyone around the globe. It was then that I was overcome with the need to create.

This painting was part of the healing process for me. Its two gold “towers” represent not only the images of destruction that were flashed thousands of times on TV and seen in newspapers around the globe, but also America’s strength. The buildings are gone and so many lives perished on 9/11/2001, but MY AMERICA still stands tall and shines brightly as a leader for the rest of the world. The terrorists tried to destroy our will and our way of life, but failed, as it only renewed and strengthened our sense of patriotism. We wept for our dead and still sometimes fear for our security, but continue to live our lives as we please. The red, white and blue represent our flag, of course….but they also represent a lot of other things to me. They represent bravery and justice. They represent all the heroes who died working so hard to save lives or have ever died defending our way of life. They represent a place where everyone is equal...man or woman, black or white, Protestant or Catholic…we are all the same. They represent a place that is imperfect, as are the people who live there, but is beloved none the less. The 'fireworks' texture is subtle, but it is so American to me, and embedded between the layers is a copy of the Declaration of Independence, as it is embedded in every American’s heart. Very few of us know it word for word, but we all know what it stands for…FREEDOM!

I may live abroad, but in my heart I will always be proud to be an American...now, if only I could say that without hearing 'at least I know I'm free...' in my head. It might be cheesy, but that song ALWAYS makes me cry!