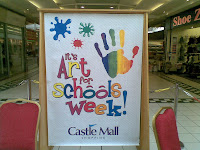 It's Art for Schools Week at Castle Mall in Antrim and I have been invited to facilitate an art project for about 250 children (approximately 50 kids per day). Given the time of year, it's not surprising that I was asked to come up with an Autmn based theme, so we're making stuffed tree sculptures! We begin by painting card with red and yellow, allowing some of it to blend to orange and setting those pieces aside to dry.

Students then attach a long piece of folded card to a square piece of folded card to create the basic sculpture form. The sides of the card are taped shut, leaving one side at the top open and the bottom of the trunk open for stuffing with crumpled newspaper later. A string is attached to the back and rolled up, then taped lightly against the card to keep it out of the way. This will be for hanging the scuplture later. If we had more time, we might round off the edges at the top, but the project takes many steps, and it's not strictly necessary. 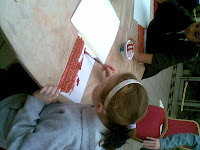 The 'trunk' is painted brown and scratched into with the back of the paintbrush to create the bark texture. It's been fun watching students modify my demonstrated technique with their own ideas, scratching in initials, hearts lines and whatever takes their fancy. 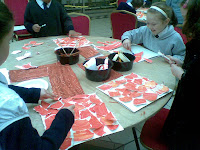 At this stage, we ripped the card they painted earlier into leaf shapes and attached them to the top of the tree forms with glue, allowing the shapes to overlap and come over the edges, disguising the square of the support.


This particular group got a late start and didn't have time to stuff them, so they will be finishing that part up at school. They seemed to have fun and I think their results are fab! 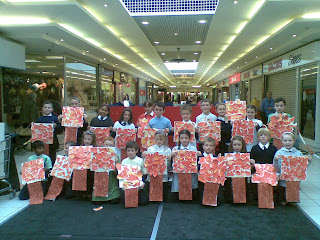